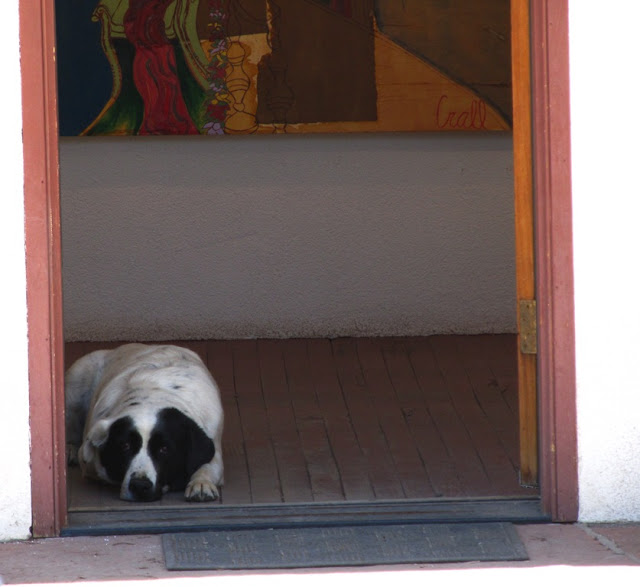 When they say a dog's life, they mean the life of THIS dog. He was just laying in the open entryway of a shop, enjoying the view. 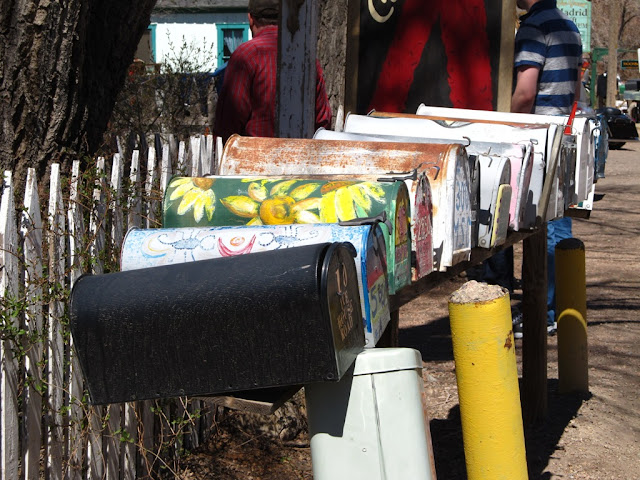 Colorful mailboxes along main street. We usually make our daytrips to Madrid during the week. This time, we went on Saturday and it was a little more crowded than usual. 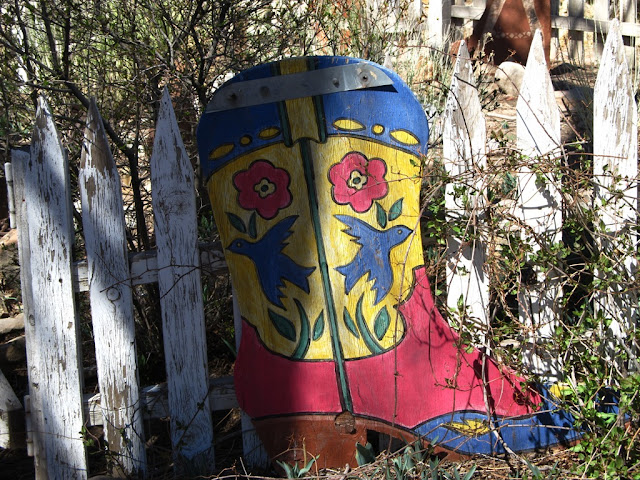 I thought this wooden boot was so cute and colorful. It just fits in with the whole Madrid vibe. The girl at the general store told us that Madrid has no government. They pretty much make their own laws as a group. When they have any trouble, they have no police department, so they have to call in the State Highway Patrol. Interesting. Maybe that's why they have a reputation as an "outlaw" town. Or a hippy town. Either way, Madrid's pretty awesome. 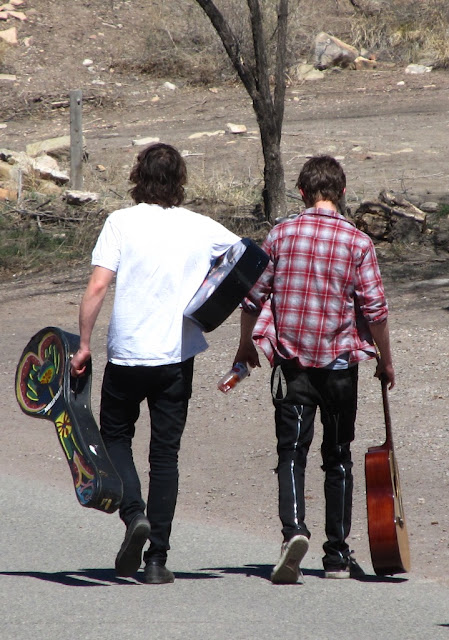 These two kids had been sitting on top of a car playing music. I don't know if they were asking for donations, but the music was pretty nice. Good job guys! 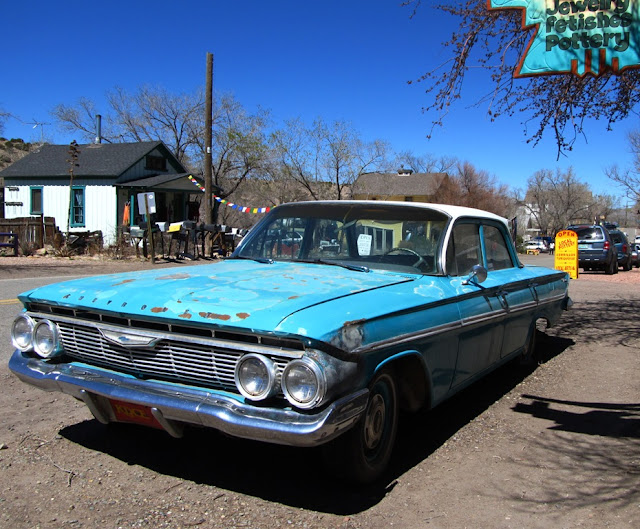 Oh my gosh, I have a thing for old cars. And trucks. In fact, on my bucket listof things I want is to have an old truck painted red or turquoise with one of my paintings and my website blazing across the side. What a fun marketing tool that would be! 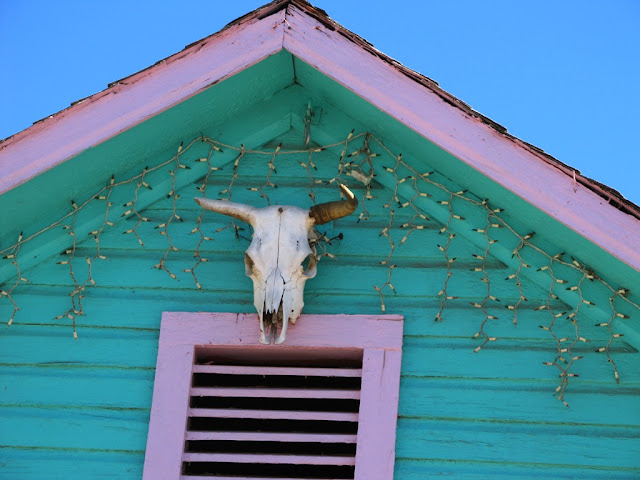 This is one of the old coal mine shacks that have been turned into houses or little shops. The skull reminded me of Georgia O'Keefe and the lights reminded me of Madrid at Christmastime. For the first two weekends in December, they decorate the whole town and have horse carriage rides, all the shops are open and everyone has homemade goodies. I love the contrasting colors of this little house. 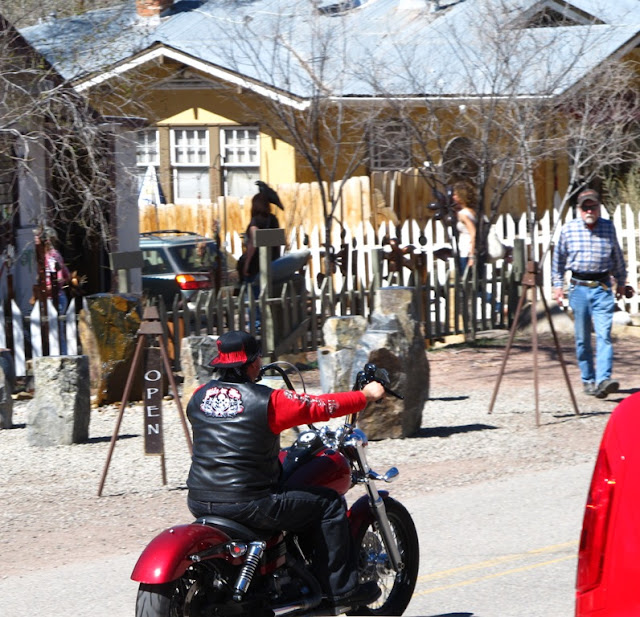 Man, I don't know what it was, but the motorcyclists were out in full force last Saturday. We saw a ton of bikers - young and old, men and women, on bikes of every make and model.
It made me almost want to go buy a Harley. 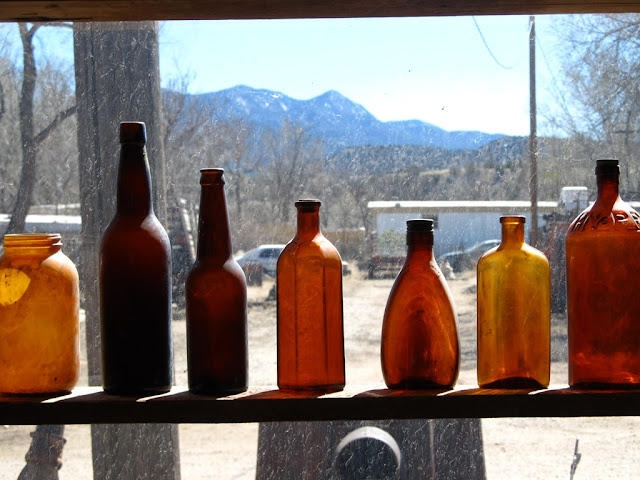 We took a quick side trip over to Cerrillos and there's a museum there. We'd never been in so we decided to take a look. It is chock full on the outside of old mining machinery and parts.

The guy running the museum was the most ornery and cranky shopkeeper I'd ever met. He told me it would cost me a dollar for every question I asked him. So I gave him $5 and told him I had a question for him and wanted to take his picture. He took the money and I asked him where he was from. He said Long Island. I said it figures. Then I took his picture. He wouldn't smile.
Instead of giving me my change, he let us go into the museum.
We saved two bucks, so I figured we got a bargain.
Cerrillos is a mining town too, enot coal though, it's for turquoise and gold, so the museum and store there had tons of little turquoise gems, and all kinds of rocks and crystal you could buy.
The museum itself was full of really old stuff, some cool and some really reepy.

I thought these amber colored bottles looked cool with a backdrop of the blue mountains. Those are the back side of the Sandia mountains you're seeing. 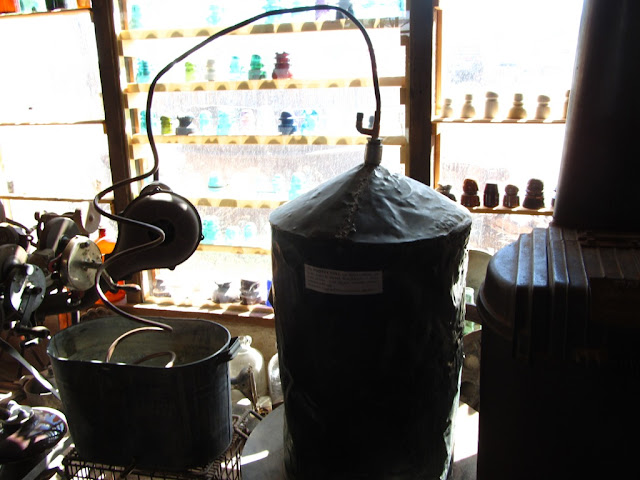 This is a still. Yep, a real still. I guess back in the day, they had to make their own moonshine. 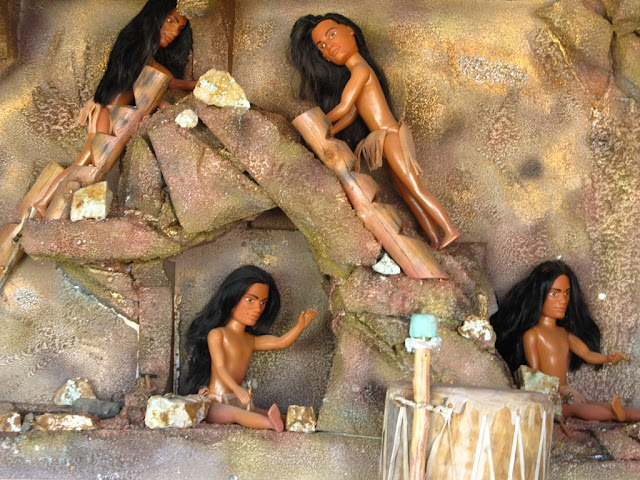 This is supposed to be Native American people mining for turquoise. At least I think so. My cousin said they all looked like Cher, then we started laughing and couldn't stop. 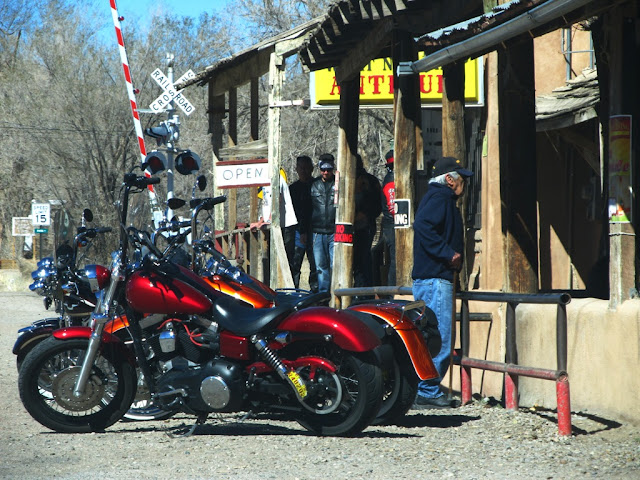 This is a bunch of motorcycles at Mary's bar in Cerrillos. Several movies have been filmed in this area. Some featuring John Wayne from back in the day and more recently "Young Guns" and Toby Keith's "Whiskey for your Horses."

One of my fellow artisans has her own gallery there and she was telling us the story of how people say the local church had a tunnel going underground to the local house of prostitution across the street and how people would pretend they were going to church or confession, and slip into the tunnel, conduct their business, and then come out of the church, looking very holy. Hmmm.

There were also a ton more saloons and prostitues than anything else.
That mining must have been hard work. 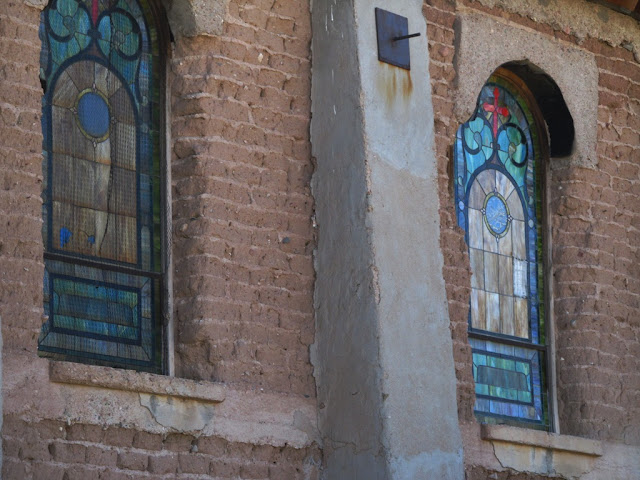 This is an old and almost falling down church in Lamy. These were the only two stained glass windows in the whole place. I don't know if you can see it, but the one on the left has chicken wire covering it and there's a large whole on the upper left-hand side. Man, I sure wish someone would restore this church - it must have been a beauty in its day. 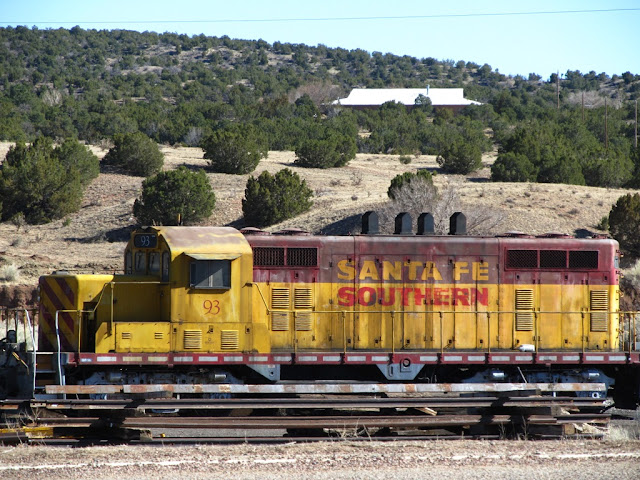 This is the train that runs from Santa Fe to Lamy. Maybe this is a spare engine, I don't know. We didn't actually see any trains running that day. But I still thought it was pretty special to see. 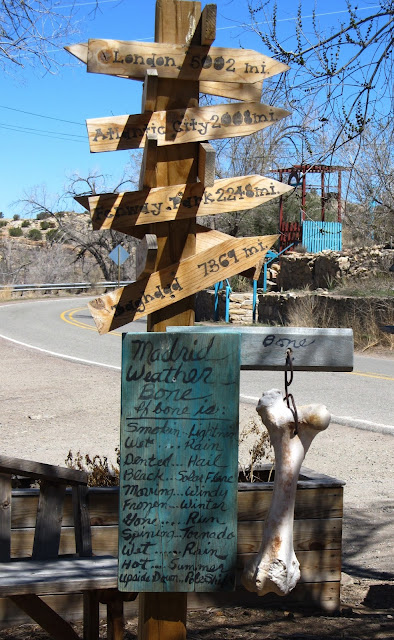 Back to Madrid -this is a sign that gives directions and also let's you know about the weather. See the bone on the side? You look at the bone, then read the sign, and yay!, you know the weather. So if the bone is moving, you know it's windy. What could be more simple? 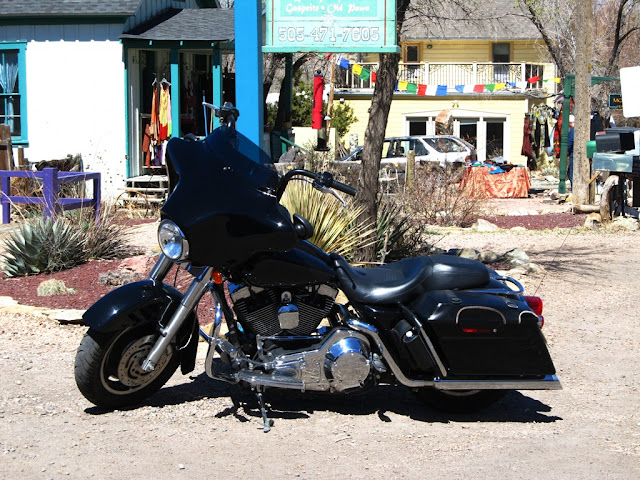 This was one smokin' hot machine. 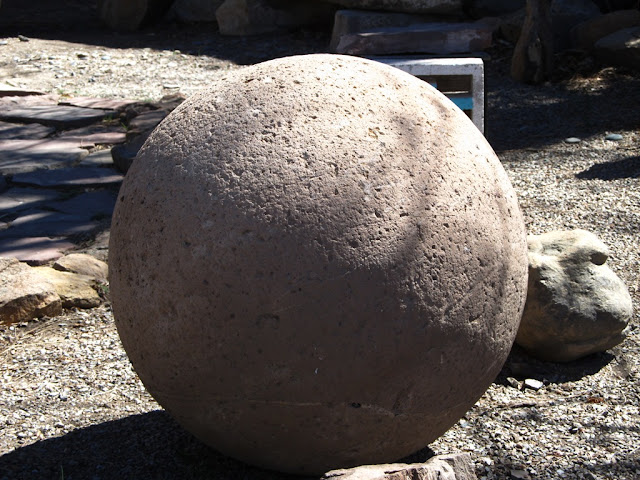 A very round, very zen, concrete sphere. I want this is my yard.
Would anyone like to go pick it up and deliver it to me? I'll trade a painting.....
All in all, we had a wonderful day in Madrid, and can't wait to go back!
Posted by Dee Sanchez at 7:04 PM