Not too long ago, I spent a week painting out in Corrales, NM.
For those of you who don't know Corrales - it's a beautiful
little farming village about five minutes from where I live.

When I need to get away, or when I'm feeling uninspired,
I jump in the car with my camera and just amble down the streets.
I go to my favorite places and I never fail to see something new.

I always photograph what I have come to call my cornfield.
I take pictures of the field during all seasons - planting,
growing, harvesting, mowing it all down,
tearing it up in order to plant again.
I figure one day it won't be there and I will always
have beautiful memories of it. 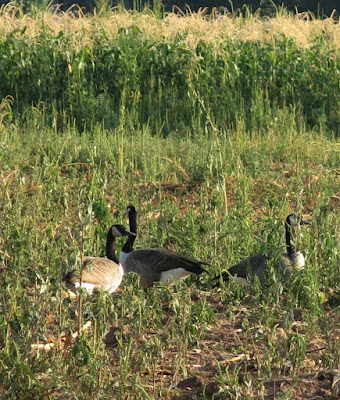 They growers had just mowed this field and the ducks were loving it!
They were eating, resting, walking around, and flying in twos
in and out of this particular spot. 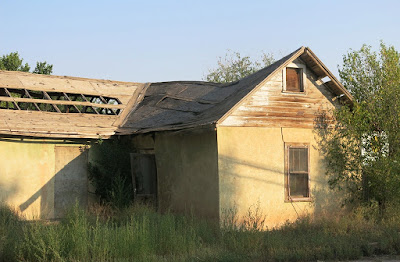 This is the old beautiful house on Corrales Road.
It's looks badly weathered but when the light catches it just right,
magic happens. 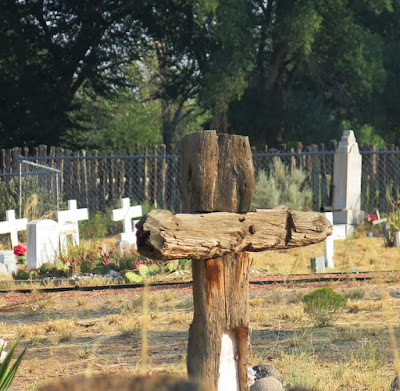 This is a wooden cross in the cemetery across from the old church.
Ar first, I thought it looked out of place with all of the other shiny white crosses.
But then I realized - they are probably all out of place
and he is right where he needs to be. 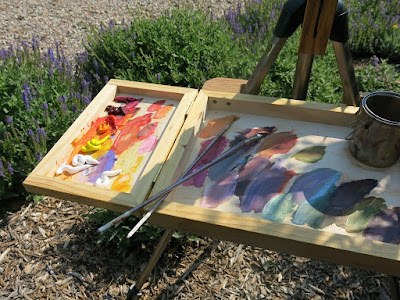 So, I spent a week painting in Corrales with about 38 other artists.
I haven't been able to get outside and paint much lately, so it was a blast.
Hard, but a blast!
Here is my palette -
I am hunkered down between trees and bushes
to stay out of the sun because I didn't want to get my big
umbrella out of the car. 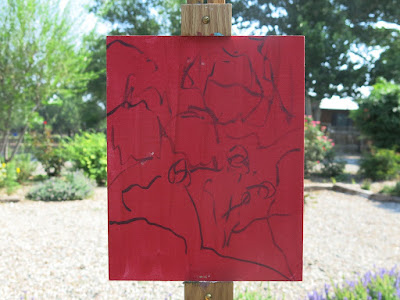 The scene was two big sunflowers, wild four o'clocks,
putple salvia, some other wildflowers,
and a view of more sunflowers in the back right by the acequia.
I loosely sketched it in and started painting. 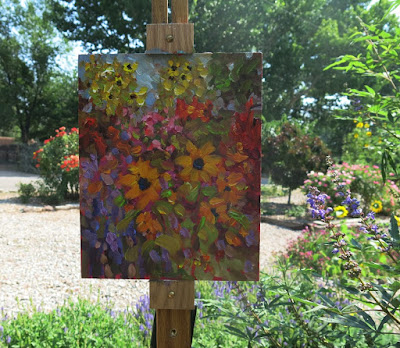 I am almost done with the painting.
I may add a few highlights later. 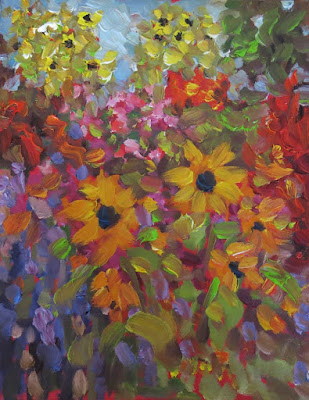 The finished painting, "MILAGRO."
This painting will be available soon. 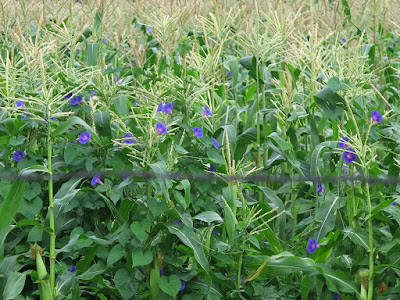 After the paint out was over, I came back.
Must have been about a week later.
I just went to see if anything had changed.
The corn had blue morning glories wrapping around everywhere.
So pretty! 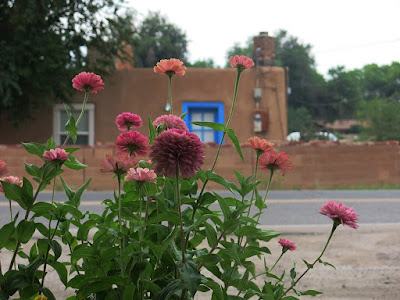 I  painted this house once before with the flowers in the foreground.
They are different this year and I just wanted a photo of them. 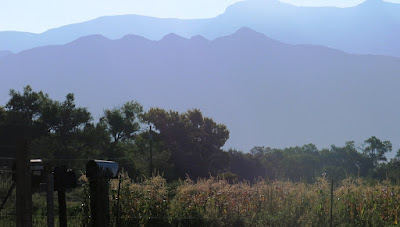 This was a beautiful scene.
I painted it during the paint out and it had such a misty feel.
It was early in the morning too, so maybe that was why. 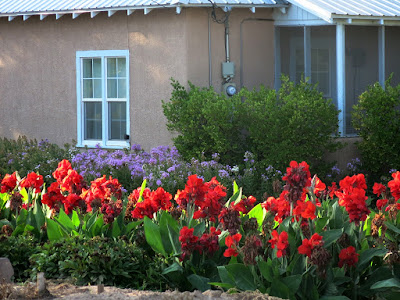 This is an older home with a bunch of purple phlox and red cannas outside.
I wanted to paint this, but it's a hard spot to get to, right on the road,
and there was always another artist there. 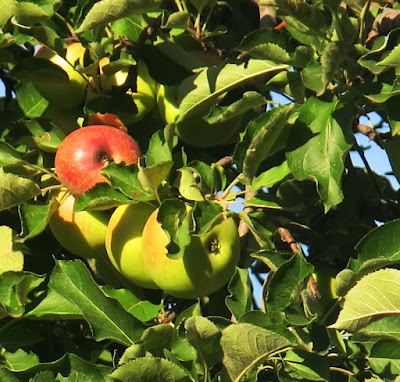 Beautiful apples in the sun. 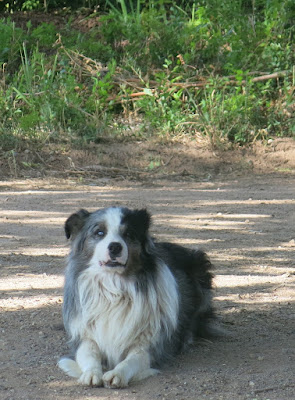 This pup was at the Quick Draw competition.
I guess he wasn't too bothered with having roughly 20 artists invade his space.
Actually, there were about four other dogs that looked
just like him and they were all super friendly. 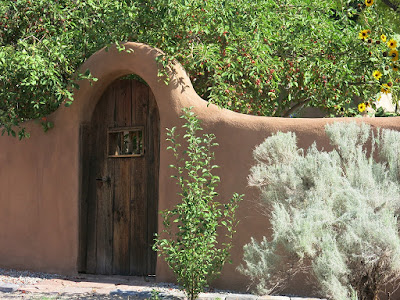 My friend Carol Hopper has painted this gate several times and
each time it just looks more beautiful. 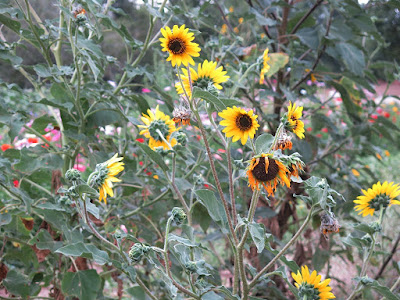 Sunflowers and other little wildflowers make a pretty scene. 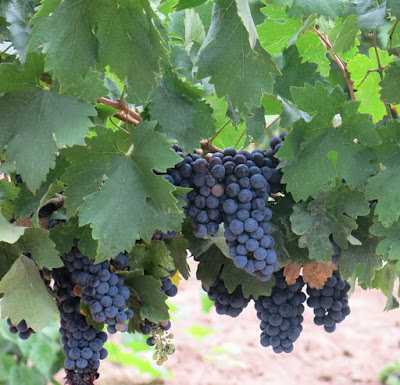 Grapes hanging from the vines at the Milagro  Winery. 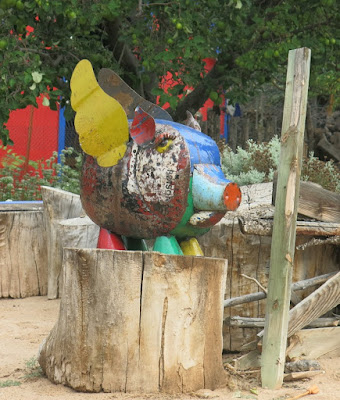 A flying metal pig at the Milagro Winery. 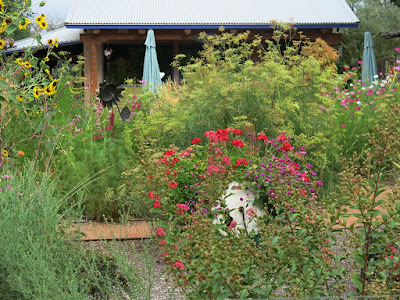 They also have a magnificent garden area. 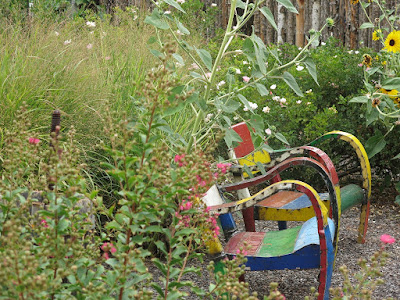 Funky metal chairs out in the flowers. 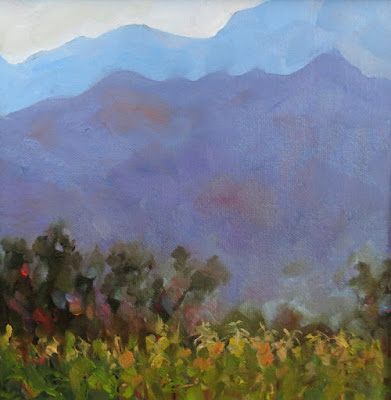 This is my painting, "SOMBRA" that sold on opening night. 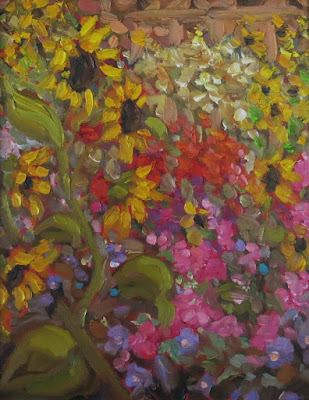 This is my Milagro Winery garden painting.
I guess I was looking for the sunflowers. 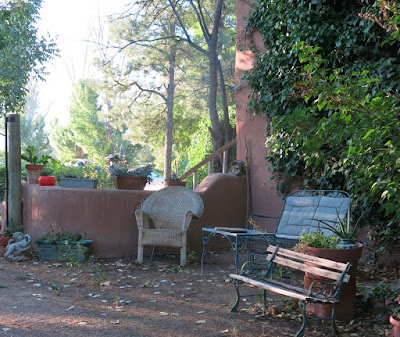 This was my scene for the Quick Draw competition.
I didn't win, but I did sell my painting to someone who saw it on facebook.
Thanks Kimberly! 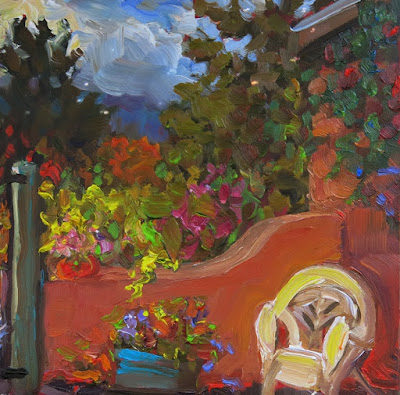 Finished painting, "RESTING.'
It's very hard to create a finished and cohesive painting in two hours.
The light keeps moving!
I was sitting with my little paint box on my lap and I dropped it!
I got paint on all of me!
But it was fun! 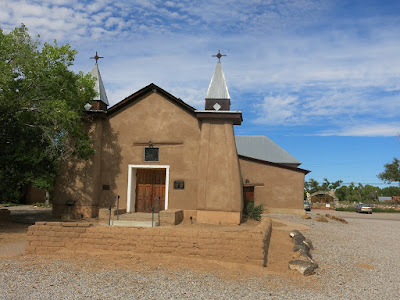 The old church is as beautiful as over. 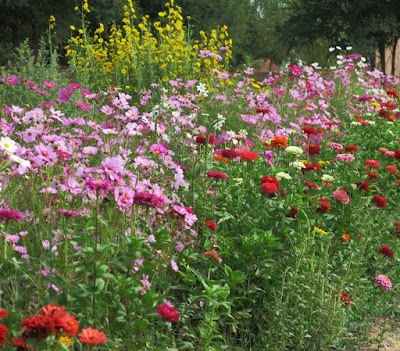 The flowers are as beautiful as ever. 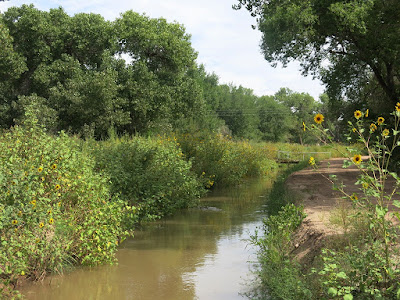 Corrales, I will be back.