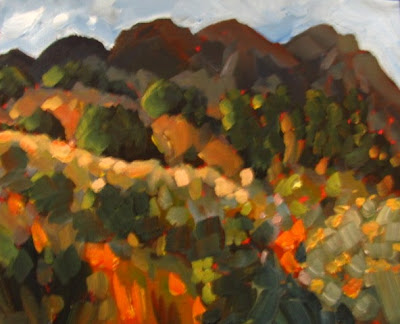 Okay, I took off early Friday morning to go plein air painting in Placitas. My destination was the Placitas Open Space. Never found it. I ran into another painter and we tried to find it together, but no luck. The end of the directions were a little sketchy. So anyway, I ended up going to the Placitas Loop Road to paint. Here's what I took with me:

I drove down the road, found my "scene" and parked my car. The first thing I noticed was that the wind was blowing about 45 miles per hour. Great.
I opened the back, took out the stool and set it up. I opened the tripod (the cigar box was already attached), set it up, took out my paints. I set up my tissue and can of solvent, put on my gloves. I took out the canvas, attached it to the box with my bungee cord and it promptly blew off and down the arroyo. Got it back and realized the bungee cord is made more for thinner wood panels and not canvas. So I finally got it to hold a little.

I put out big globs of each paint color, and dipped my brush into the thinner. I sketched the scene, and started mixing my colors. I then realized that I didn't like cadmium yellow light. It's too bright and had a cold tone. I also didn't like prussian blue, I needed ultramarine! Oh well.
So I started painting and was trying to look at the scene, hold my palette, and keep a hold on my canvas so it didn't blow off the box and down the road. Luckily my hat had a strap so it stayed on my head.

Okay, one thing about plein air painting and a limited palette. IT IS HARD WORK. You have to focus and think. You have to mix all of the colors that you see out in the field from just four colors. I never could get the magenta that I wanted.
I did absolutely love being out there in nature all by myself. Time just goes away. I did see a few walkers on the road. Including the sweet older lady (about my age really) in her little Subaru. She has four dogs with her. She takes out two dogs, attaches them to leashes, and drives down the road AT A SNAIL'S PACE, so the dogs can walk. Then, when those two are done, she puts them in the car, takes out the other two, attaches them to the leashes, and they get their turn. It's hilarious. I think I might have a photo of her. If I do, I'll post it.

So I guess the moral of my story is this: sometimes you don't end up where you thought you were going, but there's a lot of fun and discovery in the journey, and you may not have everything you want, but you probably have what you need. And you may not really like what you produced but you are going to tweak it in the studio until you love it. And that's why my plein air paintings sometimes mean more to me than studio paintings. There's a lot more challenge and hard work involved. You're out there in nature and time just doesn't exist. You are stuck with what you brought with you. You have to actually mix a green that you see in the hills from a crappy blue and a cold yellow. And you do it! Plein air painting rocks!
I'm calling this one, "SEMI CRAPPY PLACITAS PLAIN AIR PAINTING THAT I'M GOING TO TWEAK AND SELL TO SOMEONE WHO UNDERSTANDS." Or maybe just "Placitas Arroyo." Ha.
Posted by Dee Sanchez at 12:19 PM