I have a favorite cousin.
Her name is Goldie Kay and she is more like a sister than a cousin.
I wanted to do something special for her birthday, but what?
Since our favorite thing is to jump in the car and head out on a day trip,
I thought a semi-spontaneous day trip might be just the right birthday present .

So I just told her to come over about nine in the morning and we were going "somewhere."

I started out by taking her to her favorite little general store in Tesuque, NM,
which is just north of Santa Fe.
Here she is at the restaurant and as you can see,
she doesn't like her picture taken, especially with her glasses on.
Sorry cousin! 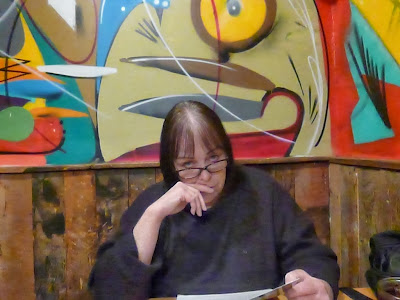 Tesuque Market - we had a delicious breakfast 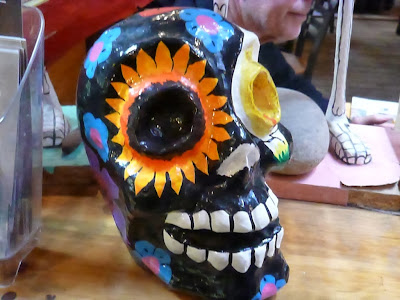 Scary Day of the Dead - looks like paper mache

Then I asked her where from there  - and she said Chimayo.
This is the road coming down into the valley of Chimayo. 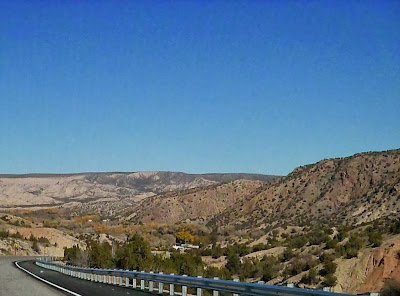 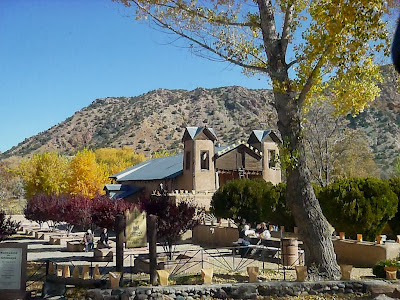 This is the beautiful old church.
They had luminarias up and a Christmas wreath on the front door.
There's still some fall color.
And LOTS of people.
I didn't think about it being Saturday. 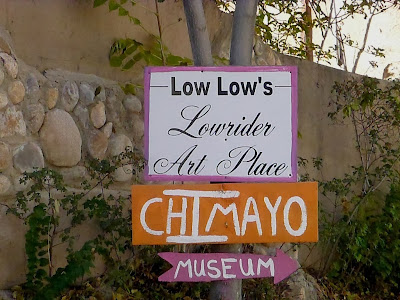 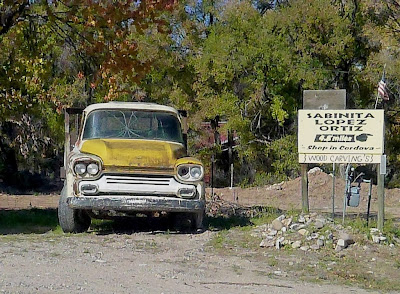 An old truck with a broken windshield.
I thought it looked artistic - kind of a sunburst crack. 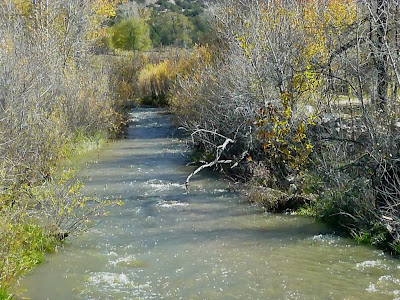 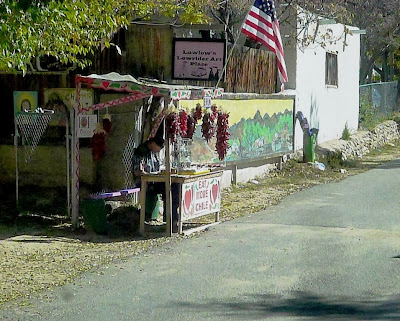 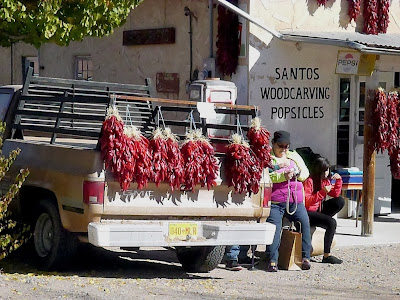 lots of ristras out today 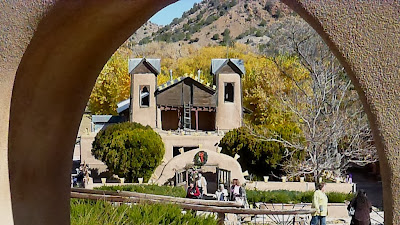 It was almost impossible to find a place to park
so I had to make do with photographing the church from afar. 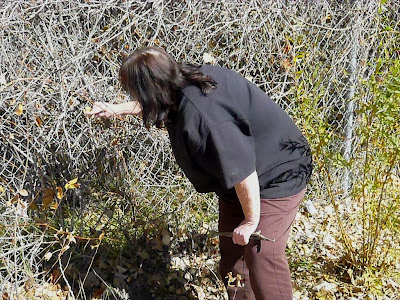 Goldie made a cross of wood to put in the fence and said prayers for her kids. 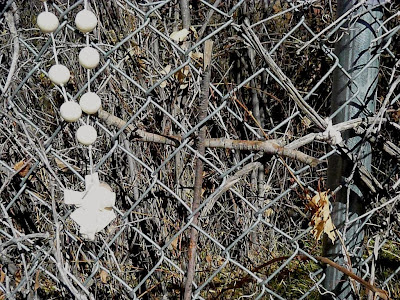 My cross of wood 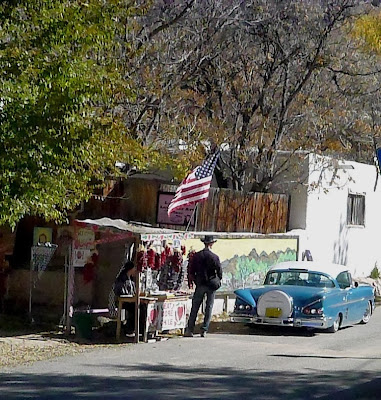 a cowboy kind of dude in a really cool car 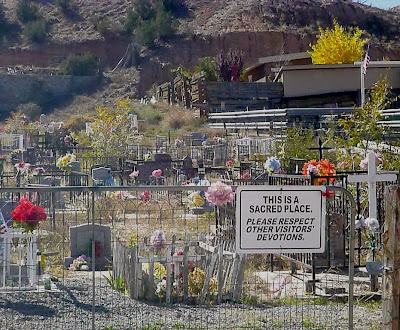 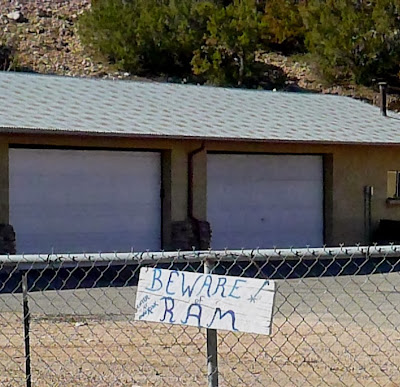 A sign that says "BEWARE OF RAM."
He wasn't very big but he sure gave us the evil eye. 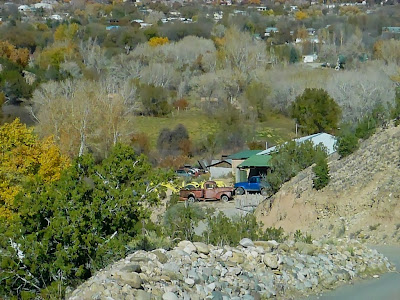 I think this was in Cordova.
We were trying to find a little chapel on a hill and ended up on this
TINY steep driveway that led to someone's house.
Embarassing.
Dogs barked at us.
I sure wouldn't want to have to drive down this road with snow on it! 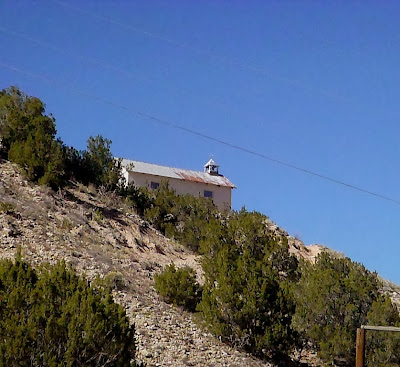 Here's the chapel on the hill.
I never did find out how to get up to it. 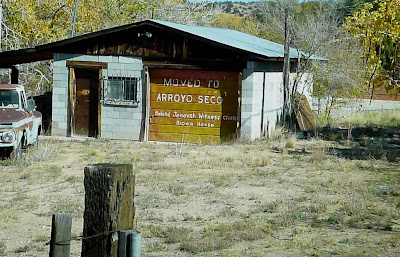 Oh my gosh, we had a belly laugh over this one.
Someone obviously moved and left a very distinct message on the garage door.
It says:
MOVED TO ARROYO SECO.
Behind Jehovah Witness church.
Brown House.
We would not stop laughing. 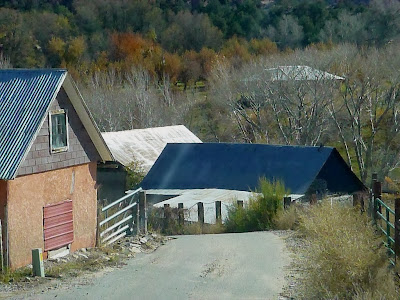 The beautiful village of Truchas.
I wasn't going to come this far but we didn't see any snow.
Well, hardly. 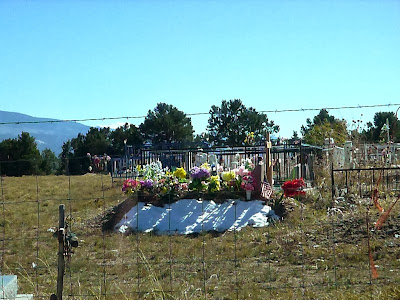 Cemetery on the way to Truchas.
Snow on the dark side of the grave. 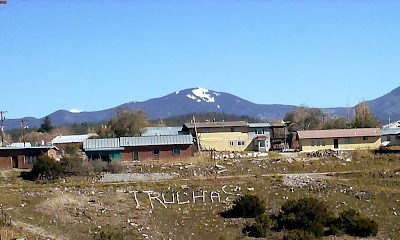 Snow on the peaks above Truchas 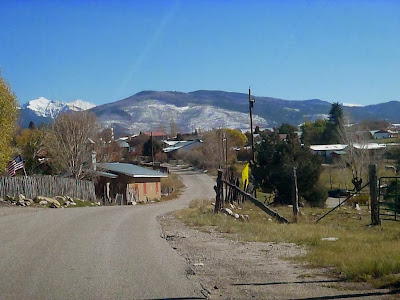 Isn't this a beautiful scene? 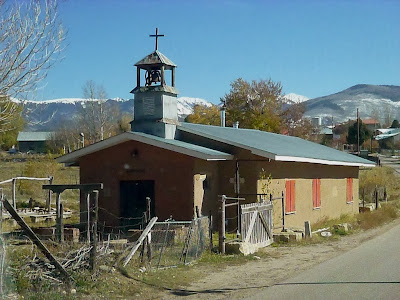 An old church in Truchas
Look at all that snow in the background. 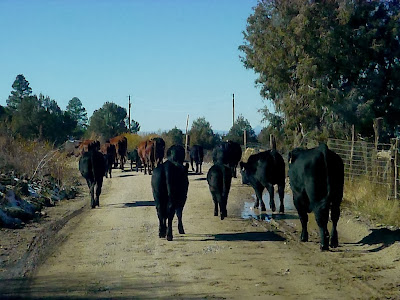 We always go down this little road in Truchas
and we happened to get behind a cattle drive.
We could not stop laughing.
There was an old truck with two old-timers in it.
We let them pass and crawled along behind them.
There were teenagers and a baby in this group.
We wondered where they were going.... 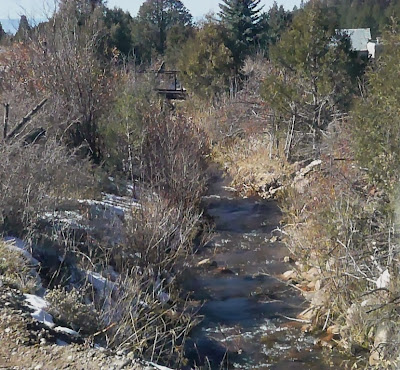 Beautiful stream along the way 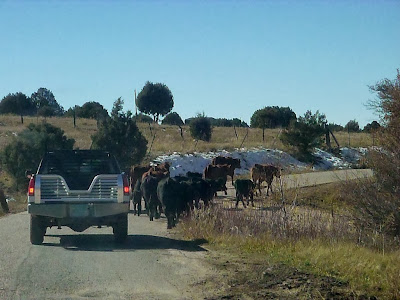 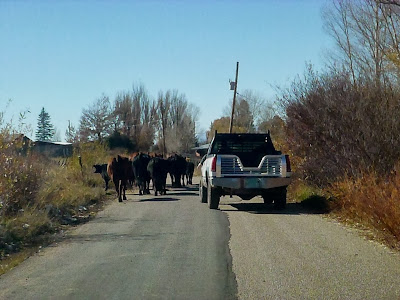 Slow going.
I think this walk took about thirty minutes.
The lead cow finally turned into a driveway and every cow followed right behind him.
Then the truck turned in and the guys waved at us.
That was so much fun! 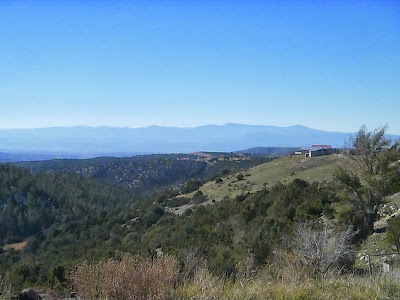 The mountains and edges of Truchas


We had a beautiful day.
The purpose of this trip was to be spontaneous (we were),
see beautiful scenery (we did),
and treat my wonderful cousin to a great birthday trip to northern New Mexico.
I think I succeeded....