I spent the day with my granddaughters today.
They are four and two.
We had so much fun playing stuff like:
Doctor Barbie, babies, puzzles,
lots of educational toys that I have,
and just enjoying being together.

We ate Chic Fil A and later I made them a picnic.
This is our ritual - I make a plate full of stuff -
strawberries, raspberries, bananas, blueberries, raspberries,
kiwi (they won't eat the kiwi because it's kind of sour,
but they love to watch me eat it to see if my face puckers up. It does!).
I also add crackers and one Oreo cookie for each of them.
I put a blanket over the ottoman and we watch Hey Dugee and eat. 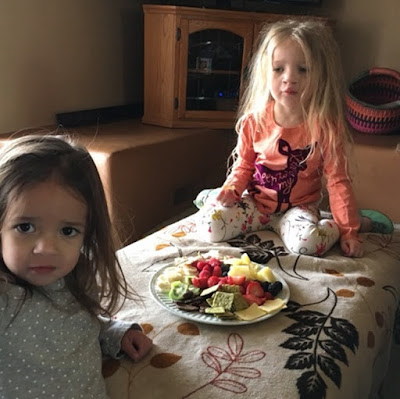 Thursday is our standing day together.
Their mama runs errands and
hopefully gets a little break from their energy.

And boy, are they energetic!

When they head home,
I usually head to the recliner or the couch with
a blanket and veg out to the Chopped or
Vanderpump Rules.
It's not because I'm physically tired.
I'm mentally tired!

I don't usually plan on doing any painting on Thursdays.

BUT, my husband decided to go to the gym late tonight
so I decided to warm up the studio and paint something.
I rummaged through some recent photos
I took in Taos and this one jumped out at me: 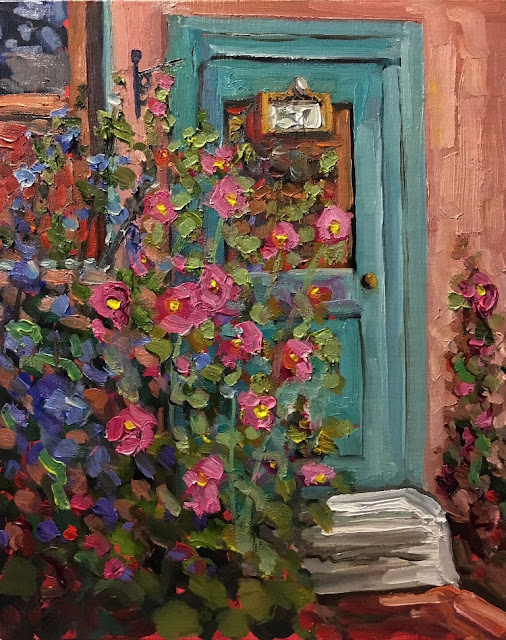 This is a photo off of one of the streets in Taos.
I had to shoot this photo while driving (I know, it's wrong).
But I fell in love with the hollyhocks against the turquoise door.
I loosely sketched the scene, then blocked in the big shapes.
Then I just pushed paint around for two hours until I was satisfied.
It's not perfect, perspectively, but it has a
whimsical feel and I like that.
And I'm done for the evening.

So three paintings down for the year.
Now, to start work on three paintings that
are calling to me.
One is a commission of two roosters, one is for my brother,
who helped me start this blog back in 2006.
The other is a huge painting for my sister-in-law,
and I'll tell you about that later.

Note 1: I am enjoying the paintings I'm seeing from our group,
"LETS PAINT NEW MEXICO!"
They are inspiring and the group offers a send of community
to the artists participating.

Note 2: Life is short, enjoy your family, and celebrate everything.